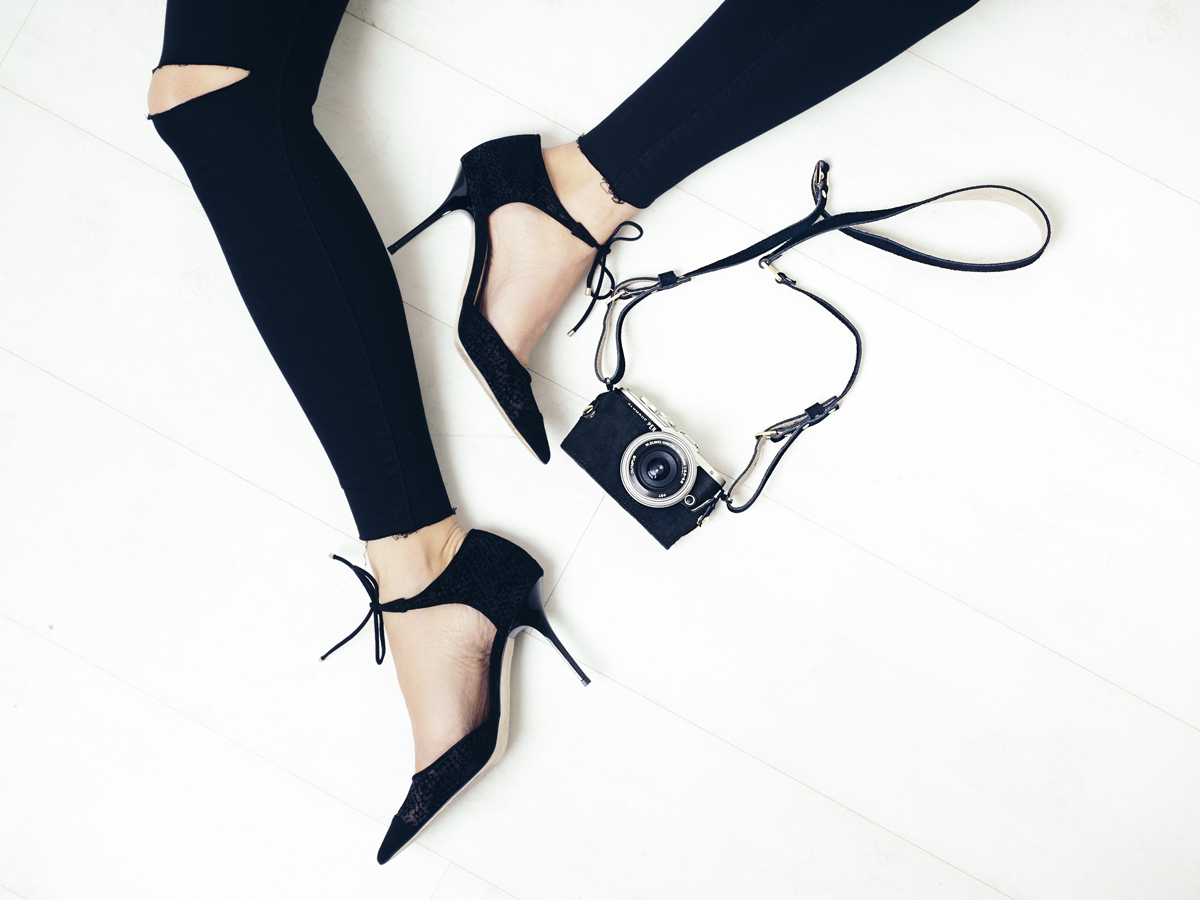 There is one clear way to know you have walked into a bloggers event and not a Wedding event like I accidentally did once (don’t even ask!), and it’s by the number of Olympus PEN cameras you will see hanging off peoples necks. The Olympus PEN E-PL7 has been the bloggers camera of choice since it launched 2 years ago, with newbies to professional full time bloggers sporting it as an attractive accessory. So many blogs that I look up to for their amazing crisp photography use the PEN which is why I’ve been lusting after one for some time, and yesterday the successor to the E-PL7, the Olympus PEN E-PL8 was announced!

Now, I’m no photography expert so I have teamed up with Will Ablett from Park Cameras to guest post on Devoted To Pink so he can give you a low down on the latest Olympus PEN model. The team at Park Cameras are awesome and know everything there is to know about cameras, so if you have any questions for them regarding the E-PL8 just leave them in the comments below and they will get back to you. 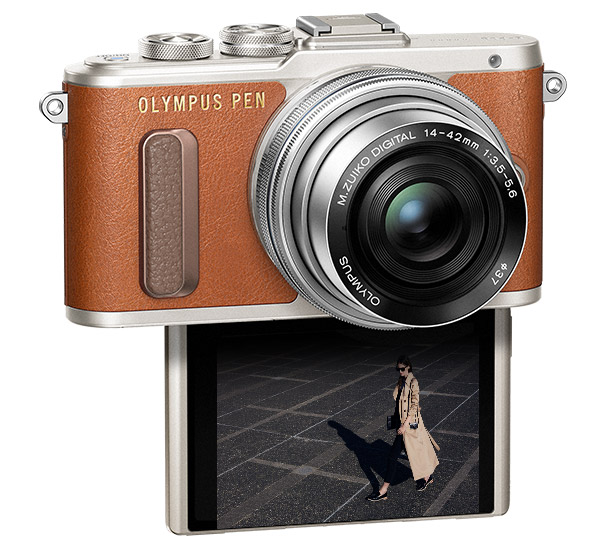 The E-PL8 (try saying that 100 times) has been redesigned but still retains the same
signature PEN look and feel as its predecessor, the E-PL7. I’ts thinner, has a new
grip, and is slightly shorter, making it feel a bit nicer in the hand, and the dials
on top are redesigned with a more classic look too.

Other small touches like doing away with the chrome trim on
the front and flattening out the top dial panel dramatically change the look
and feel of the E-PL8.

Olympus seem to have modelled the E-PL8 after their fabulous
PEN-F, which itself was modelled after the queen of 60’s camera styling – the
original Olympus PEN-F – a gorgeous silver and black film camera with crisp
lines and compact form. 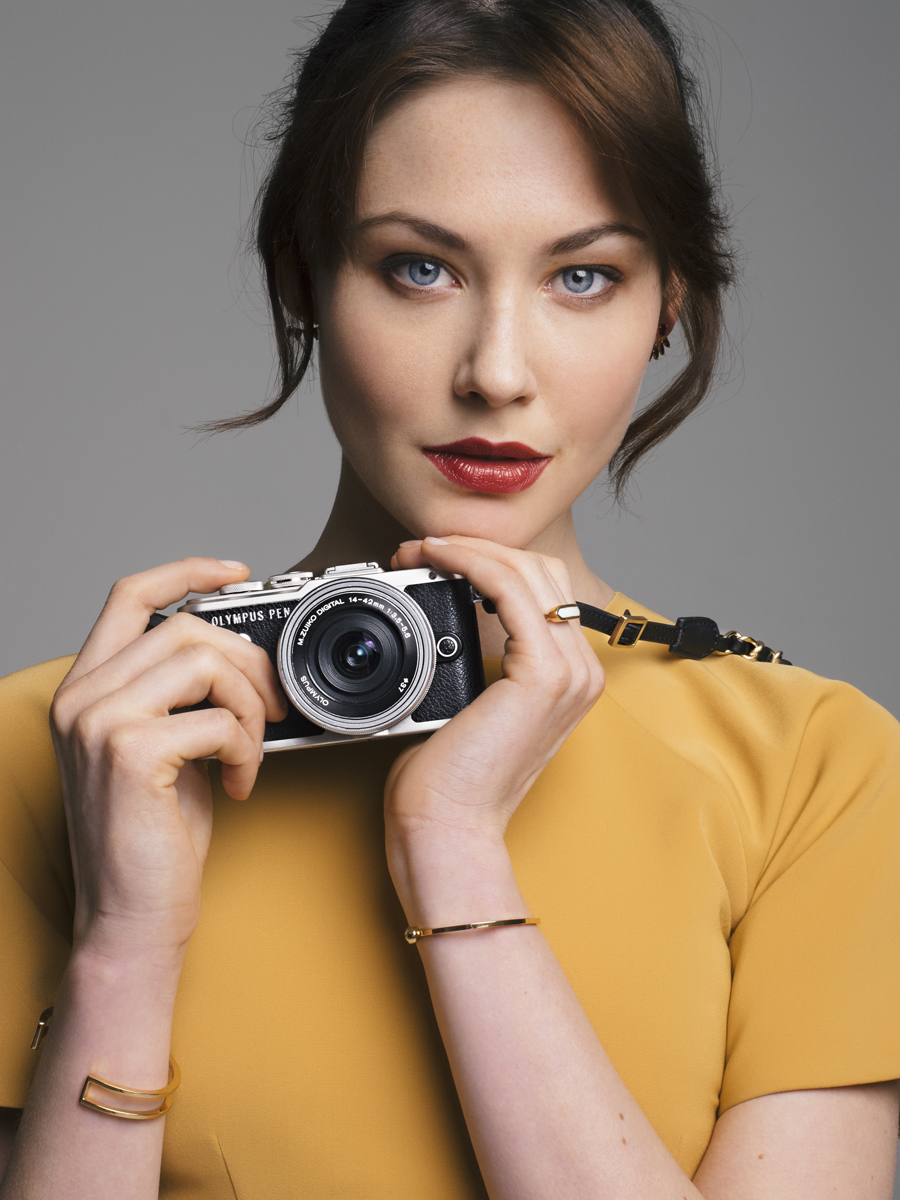 Drawing on these decades of history and nostalgia, Olympus’
new E-PL8 looks like it belongs in a different time, when really it’s a contemporary
digital micro four thirds camera designed around our modern image sharing
lives.

It’s probably worth explaining what Micro Four Thirds actually is. If old 35mm film is considered the ‘standard’ size, a ‘35mm
Full Frame’ digital camera now is also considered the ‘standard’. Micro Four
Thirds are smaller than full frame by about half the dimensions and around a
quarter of the area size. There’s a really useful chart over at Lensvid.com on sensor size comparison.

By using this format, Olympus have made the E-PL8 a compact
mirrorless camera with the benefit of being able to change and upgrade your
lenses. The creativity and freedom this gives a professional cannot be
underestimated; if you’re a blogger that’s used to shooting selfies, portraits,
and product shots with a smartphone or a compact camera, the ability to use a
different lens depending on the type of image you’re taking will transform your
photography.

For example, if you know you’re going out and are likely to
be taking photos of people, you’ll probably want to use a more flattering
wide-angle lens, but if you’re at home shooting small objects, you might want
to use a longer macro lens. This kind of freedom was traditionally reserved for
high-end digital SLR cameras, but the introduction of mirrorless cameras
changed all that.

Now we’re all agreed that this camera is a bit gorgeous and
will go with anything, let’s have a look at what it’s like to actually use.

One of its biggest selling points is the same flip-down and
tilt-up touch screen that the E-PL7 had, but this time Olympus have given us
what they’re calling ‘touch selfies’. 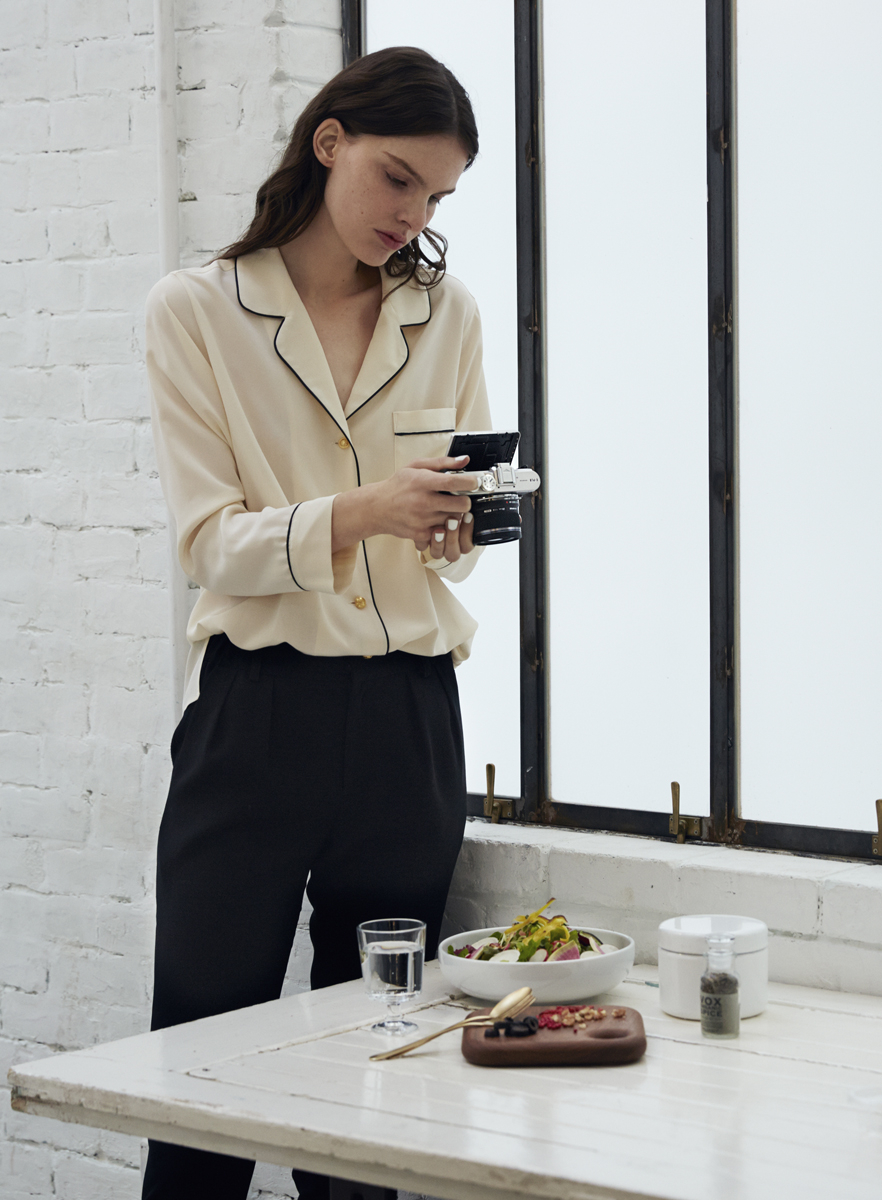 Basically, when you flip the screen down, the Selfie Mode
automatically activates, whatever lens you’re using will automatically zoom out
to wide-angle, and the screen adapts to show a few key controls for one-touch easy
use.

Otherwise, it’s broadly the same underneath as the E-PL7,
with the same 16.1 megapixel sensor, 81 point autofocus, 3-axs image stabilisation,
and a 3-inch 1,040k-dot LCD touchscreen which, if you’ve had an E-PL7 before,
you’ll know is clear and sharp and being tiltable means you can shoot from the
waist or shoot from above without having to actually be above the camera
yourself. 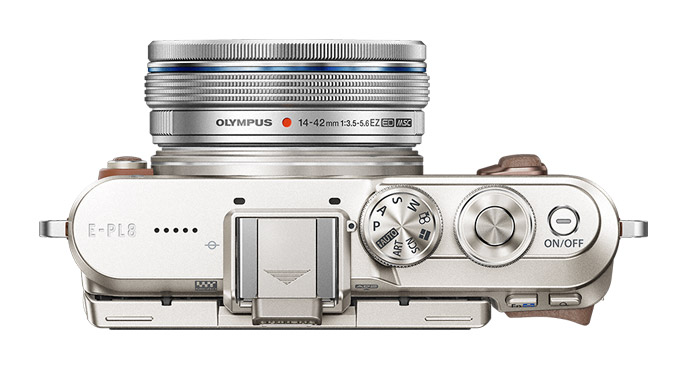 It’s not just a stills camera though, the E-PL8, like its
predecessor, will also shoot Full HD 1080p video. A great feature with video is
that you can record in short bursts and save them to ‘My Clips’, then stitch
them together in-camera and add a soundtrack and a choice of filters.

It will easily connect via Wi-Fi to a smartphone too, and
can be controlled by Olympus’ own app, which means you can set it up on a
tripod or on a table or anywhere and use your phone as a remote for full-body photos
or product shots from above. 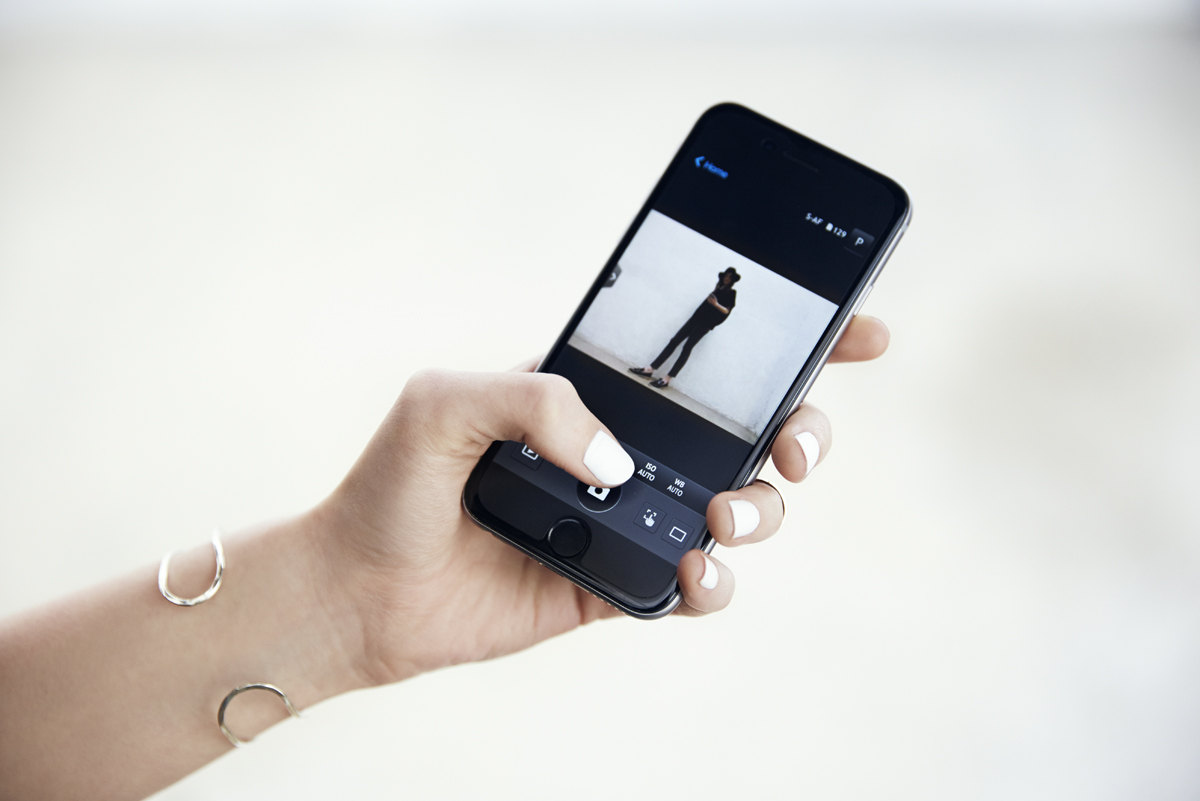 The E-PL8’s Wi-Fi ability doesn’t just mean it can be
controlled remotely, it also means you can edit and share images and videos
straight from the camera to social networks.

Where I can see the E-PL8 really standing out though is in
its range of thoughtfully designed accessories, including colour-coordinated
bags, hand straps, shoulder straps, body jackets for the camera, suede bags…
the list goes on. It makes it more than just a camera, it makes it something to
be worn, rather than carried.

About the author: Will
Ablett is Park Cameras’ blogger and content writer, with a BA (Hons)
degree in Commercial Photography from the Arts University Bournemouth.

I can’t wait to get my hands on the new PEN and once I do expect a full blog post on my thoughts.

What are your thoughts on the new Olympus PEN E-PL8? Are you tempted?