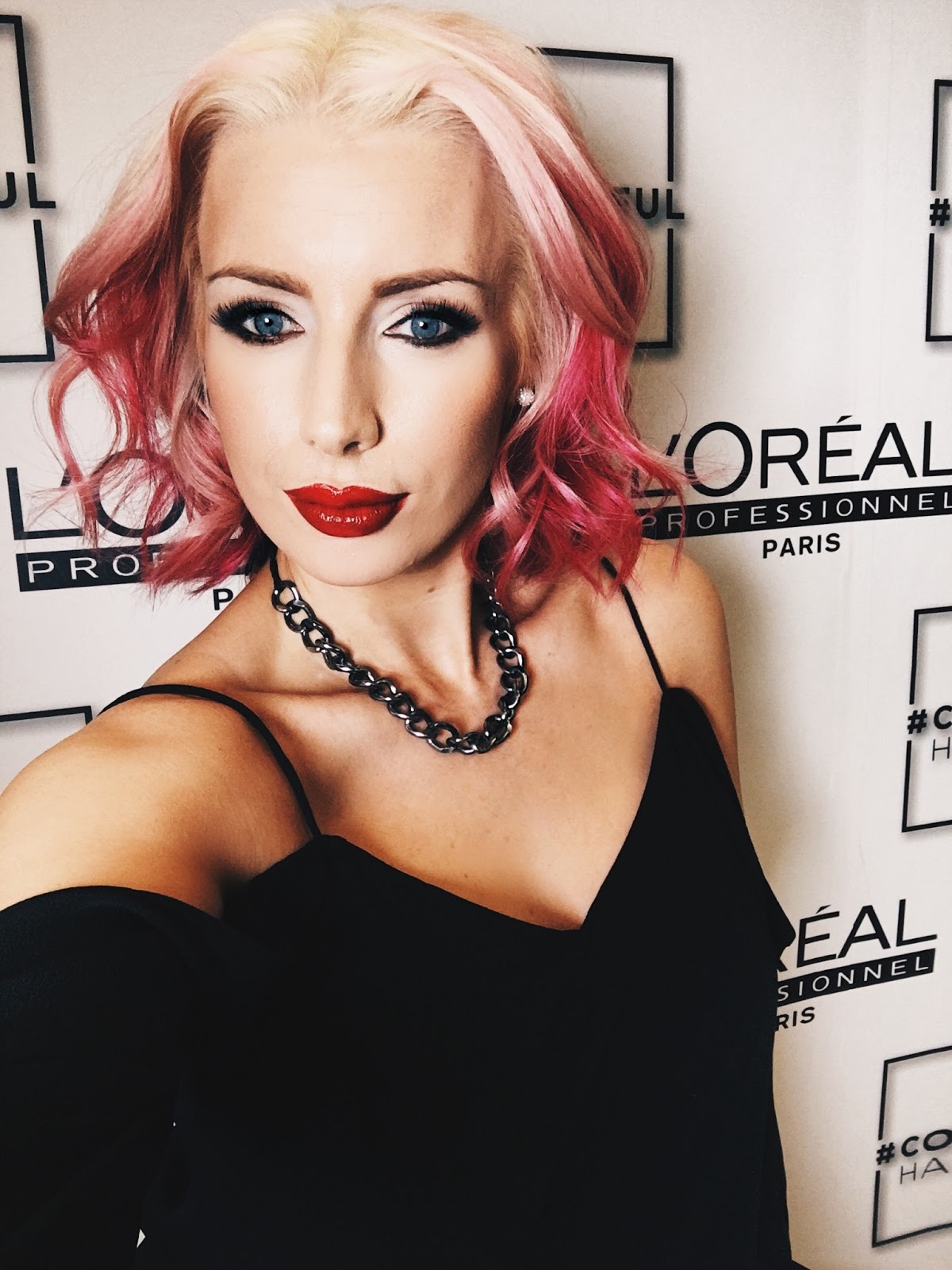 If you follow me on Instastories you would have seen that I spent last weekend in London. I’m in London a lot but last weekend was no normal trip – It was jam packed and it ended on the Sunday with me modelling for L’Oreal Professionnel (crazy, I know!), so I thought I’d tell you all about what I got up to! 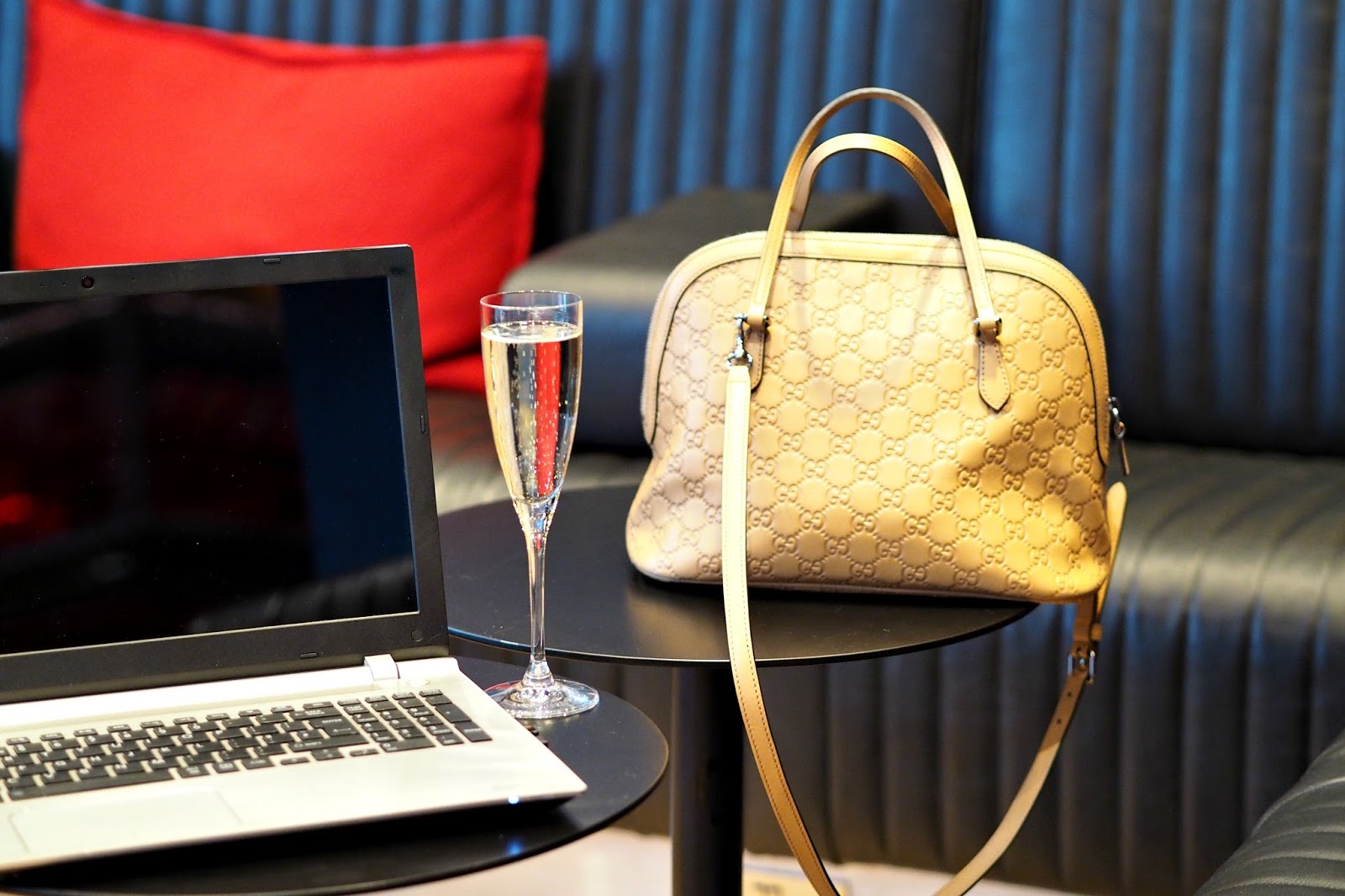 As I was already going to be in London on Saturday I decided to book a hotel as I couldn’t be bothered with trekking back to where I live on Saturday night, to only come back again Sunday morning. I stayed at the Citizen M hotel by Tower Bridge. It was my first time there and I was seriously impressed. It has a real chilled out, boutique feel to it and my room had awesome views of the Tower of London. Not to mention the technology – everything was controlled by an iPad – the TV, heating, blinds and you could even change the colour of your shower with it! I opted for pink of course! 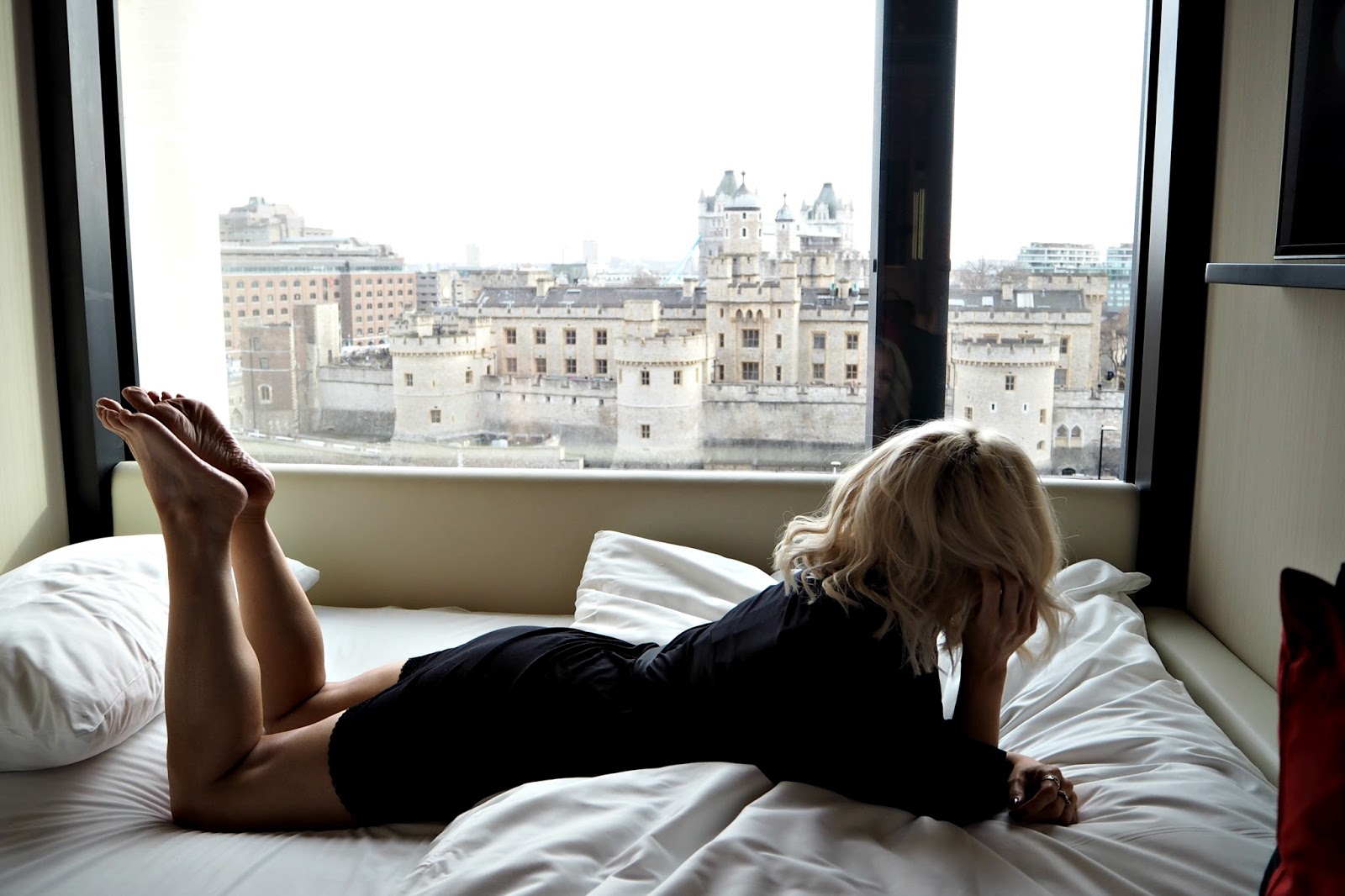 I got to the hotel early to get on with some work and ordered a glass of bubbly to go with it – it was a Saturday after all. I sat and worked for about an hour and a half until the lovely Fran joined me.

I packed away my laptop and spent the afternoon drinking with Fran, as well as meeting up with Hayley and her husband Steve for a drink, before Fran and I went off to dinner and more cocktails at The Folly.

I got back to Citizen M about 9pm and as I was on my own I thought it would be a good idea to carry on drinking in my room and do an Instagram Live… Probably not my best idea! I got cut off from Instagram twice as I talked so much – it only lets you do a live for an hour. Yes I spoke for 2 hours!! This is another reason I shouldn’t do YouTube as I can seriously talk! For the life of me I can’t even remember what I spoke about for so long! But I remember there being a few funny instances but I think it was one of those “you had to be there” moments so I won’t bore you with it now. Note to self: Don’t do an Insta Live after drinking and don’t talk for 2 hours! 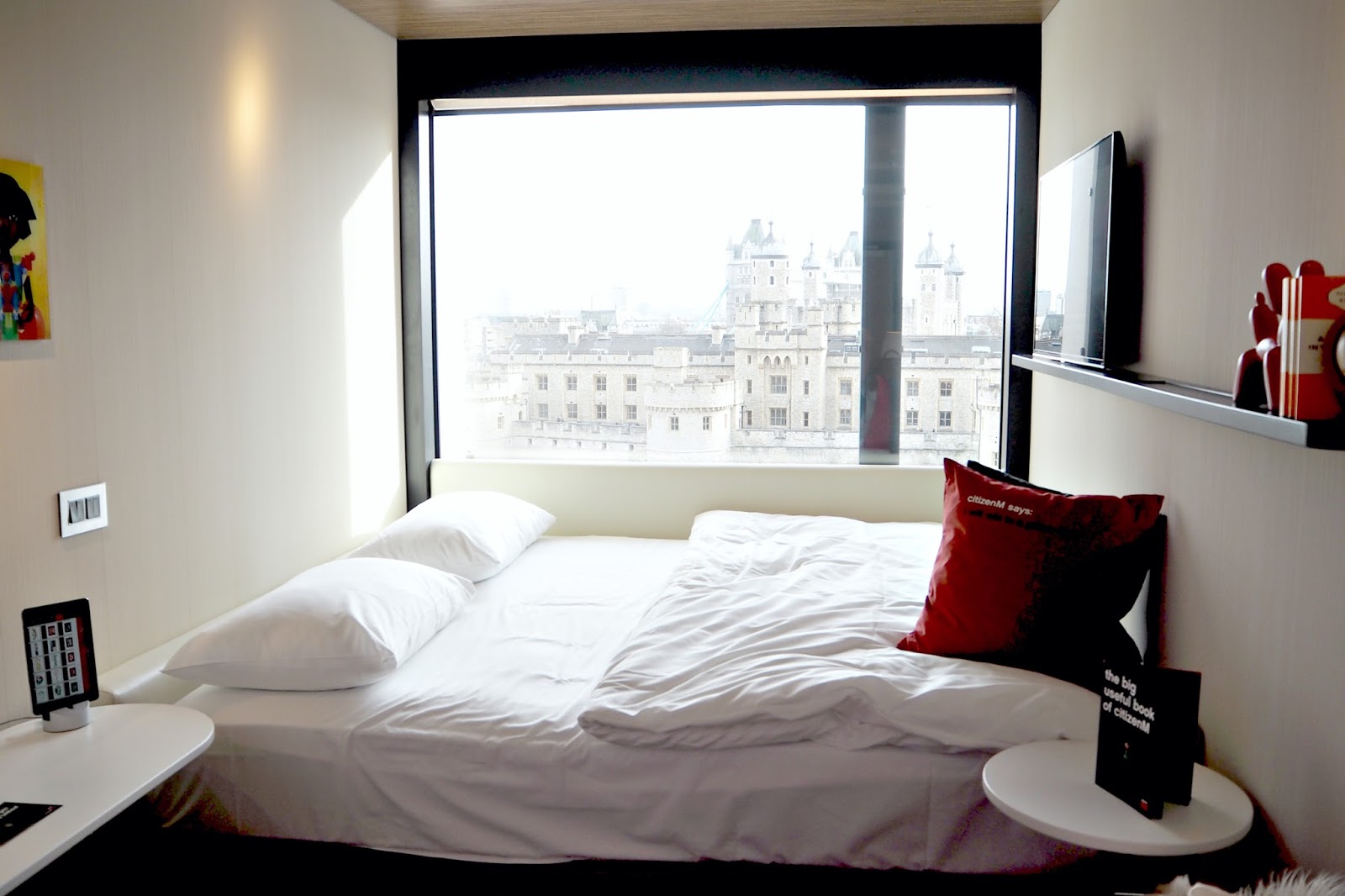 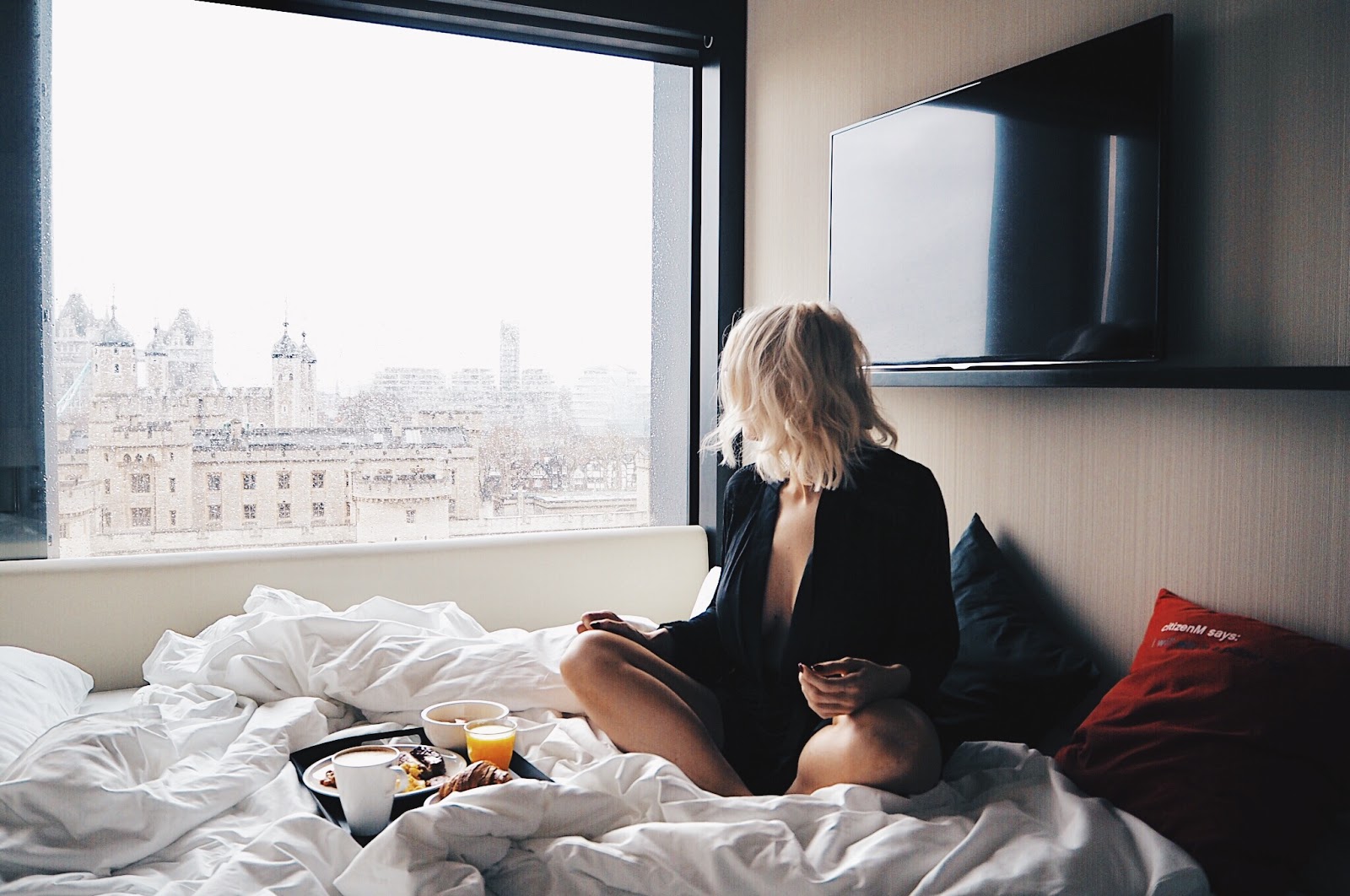 On the Sunday I was picked up at 12pm and taken to L’Oreal’s Head Office in Hammersmith, as I was modelling for their new #Colorful Hair range – it feels so weird typing that!

L’Oreal had gone all out with the colourful theme and everything was multi coloured from confetti on the floor, to the balloons, and even the food they served.

So let’s talk a bit more about why I was there and what the new product is all about…… I was modelling for their new #Colorful Hair range which is a selection of temporary colourful dyes that you can only get done in L’Oreal salons. The advertising campaign is to highlight that although you can dye your hair at home yourself, by going to a salon you can achieve some amazing looks that would be extremely difficult to do yourself – such as multi-coloured mermaid looks, ombre, root pull and many multi-dimensional colours. It was a really busy day with lots of other bloggers and models there as L’Oreal wanted to showcase as many different looks as possible. 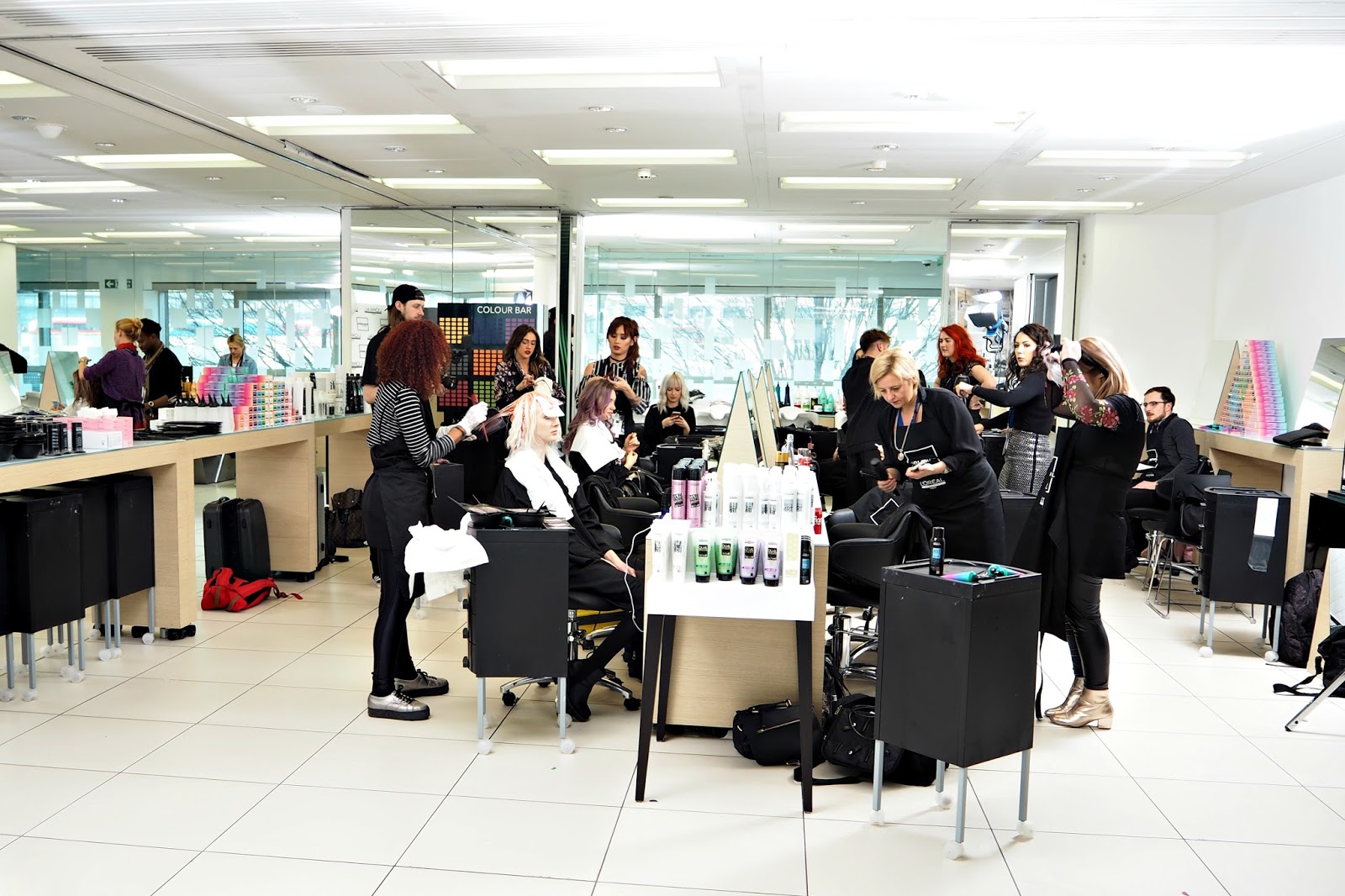 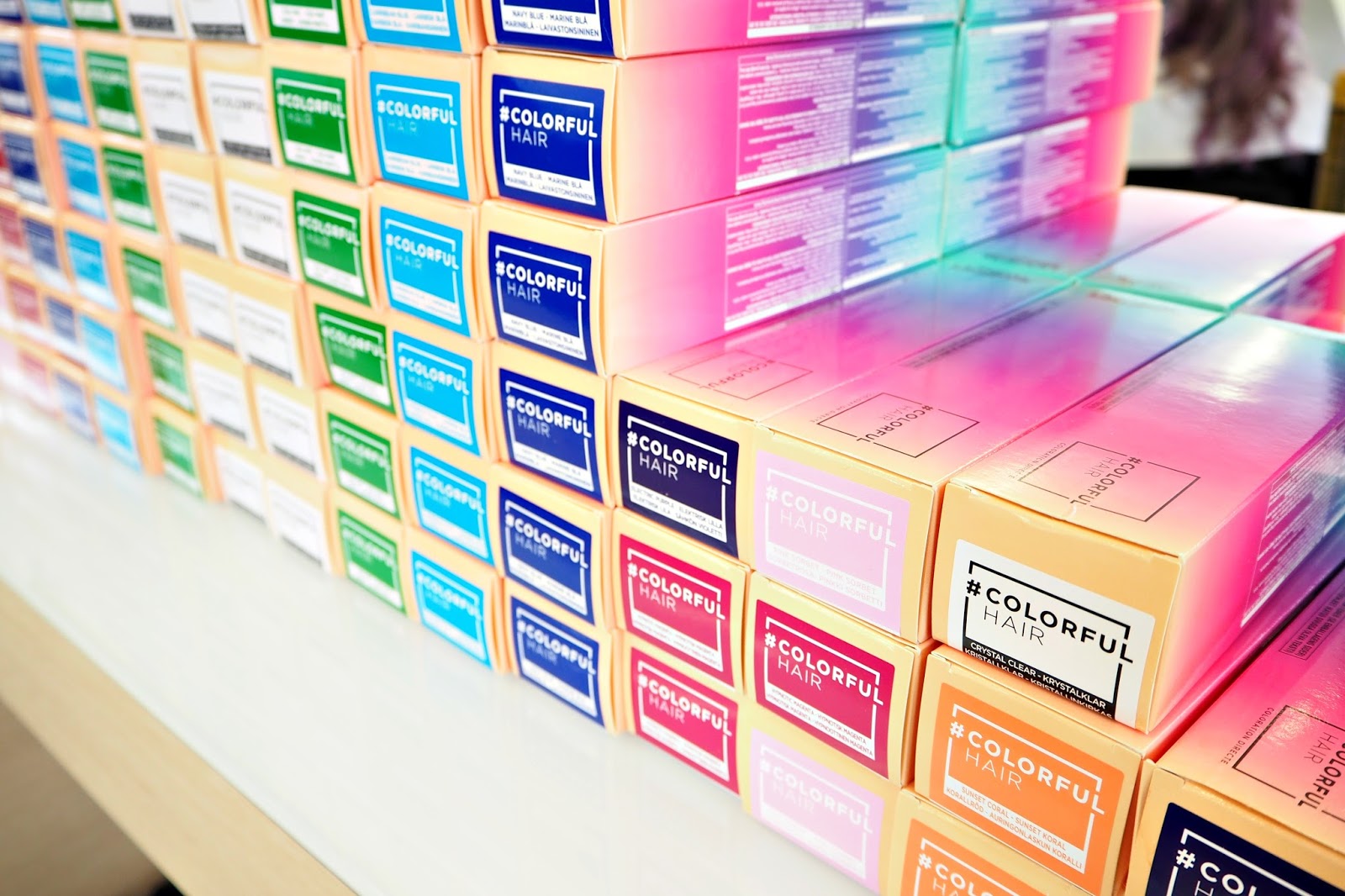 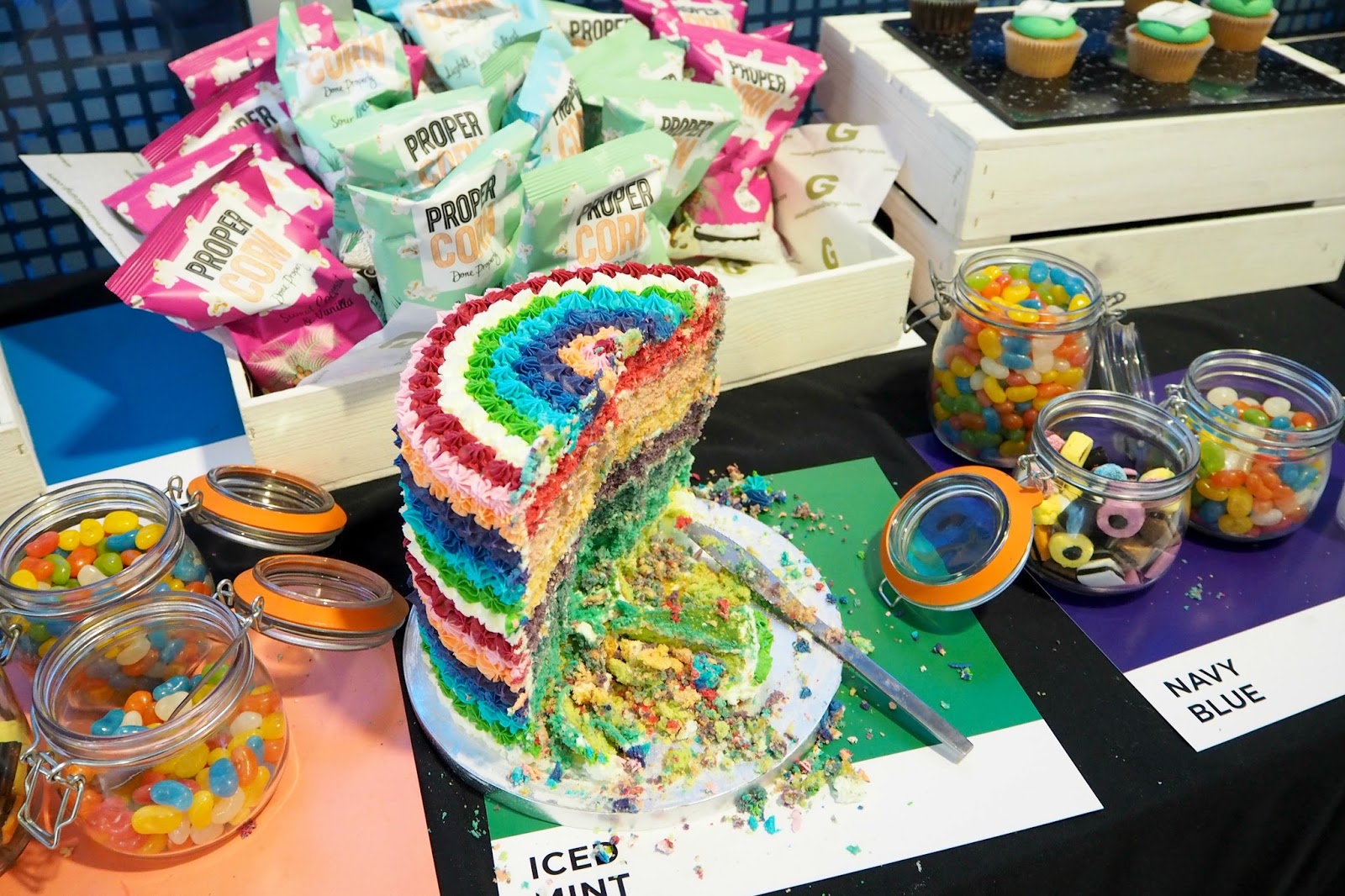 When I arrived I went into makeup. I had already done most of it myself but I got them to touch it up before I went into the first shoot. I was taken into one room to do the video “before” shoot. I don’t want to give too much away but the videos they are making will show my hair before and then after. Next up was the “before” photo shoot. This was followed by a quick tea break and a briefing from L’Oreal. 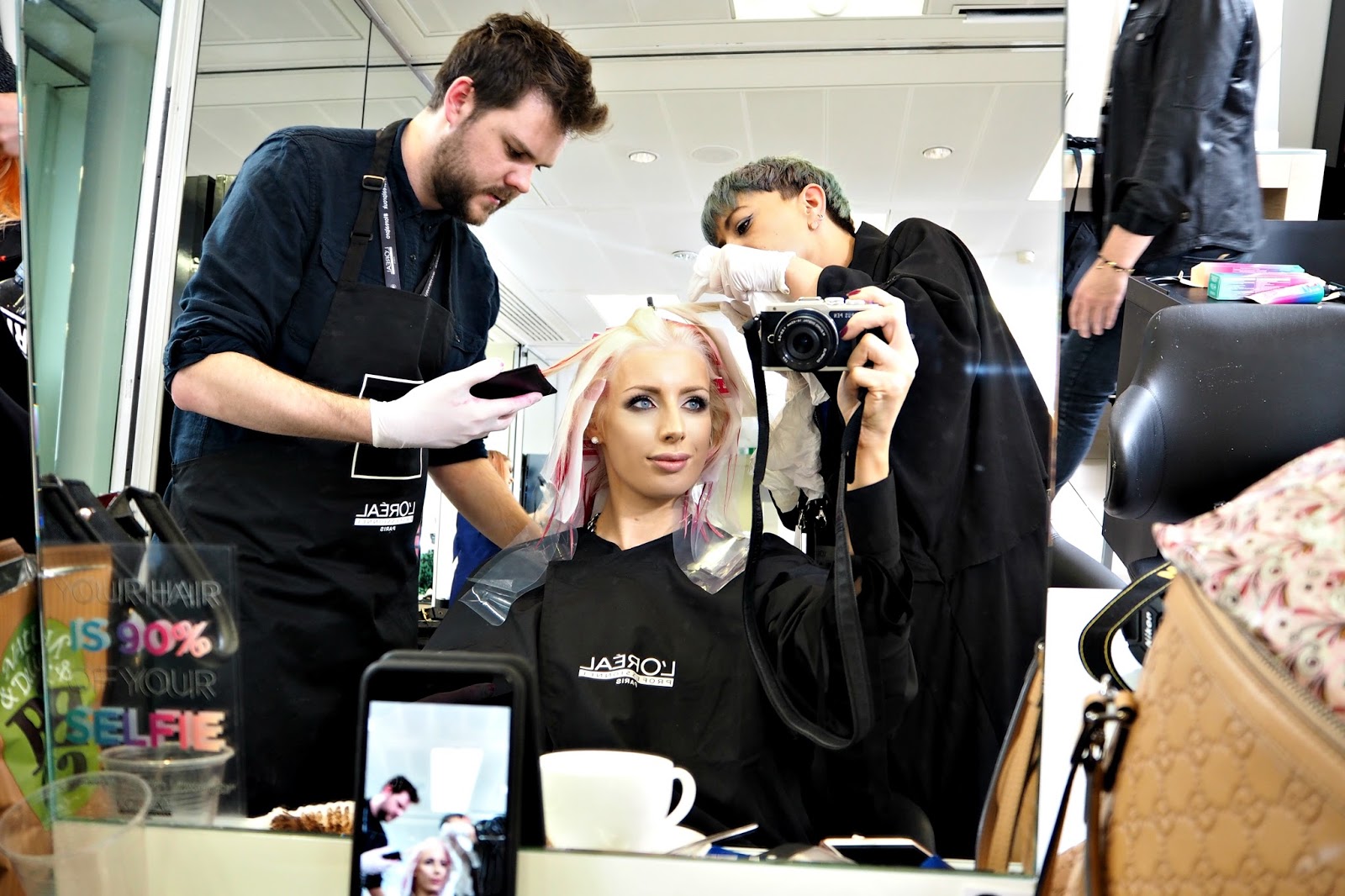 I was then introduced to my stylists who would be creating the look of pink ombre for me – I had Will and Lara from Electric and by coincidence they were from Brighton which isn’t far from where I live so we had lots to chat about. I totally felt at ease with Will and Lara and knew my hair would be in good hands with them.

Will decided to bleach my roots first as there was a tiny amount of regrowth there and he wanted to photos to look spot on and perfect. After that he applied two different shades of pink to my hair in V shapes to create the ombre effect. This is definitely something I couldn’t have done on my own at home. An all over colour is one thing, but what he did was something else! 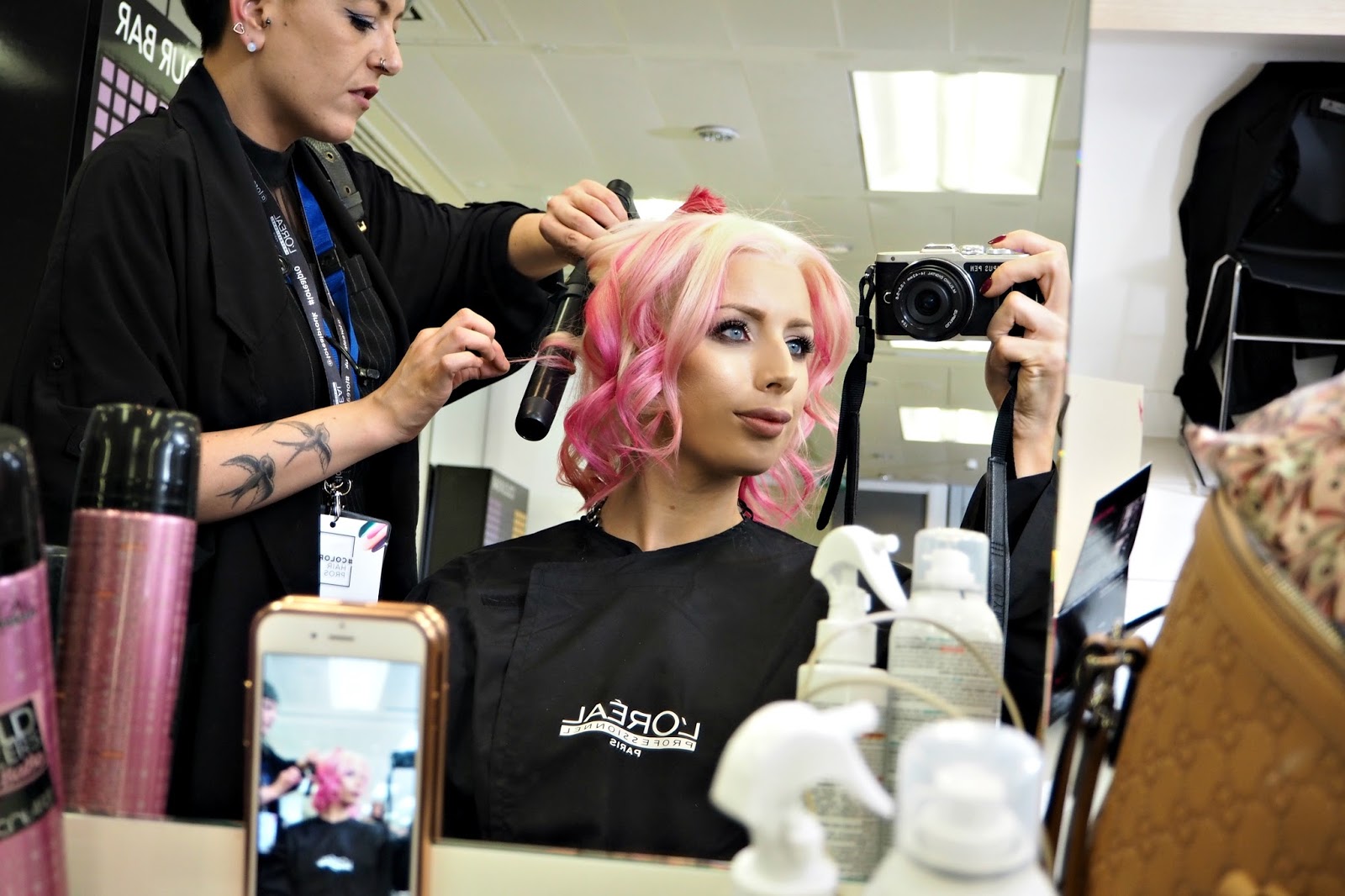 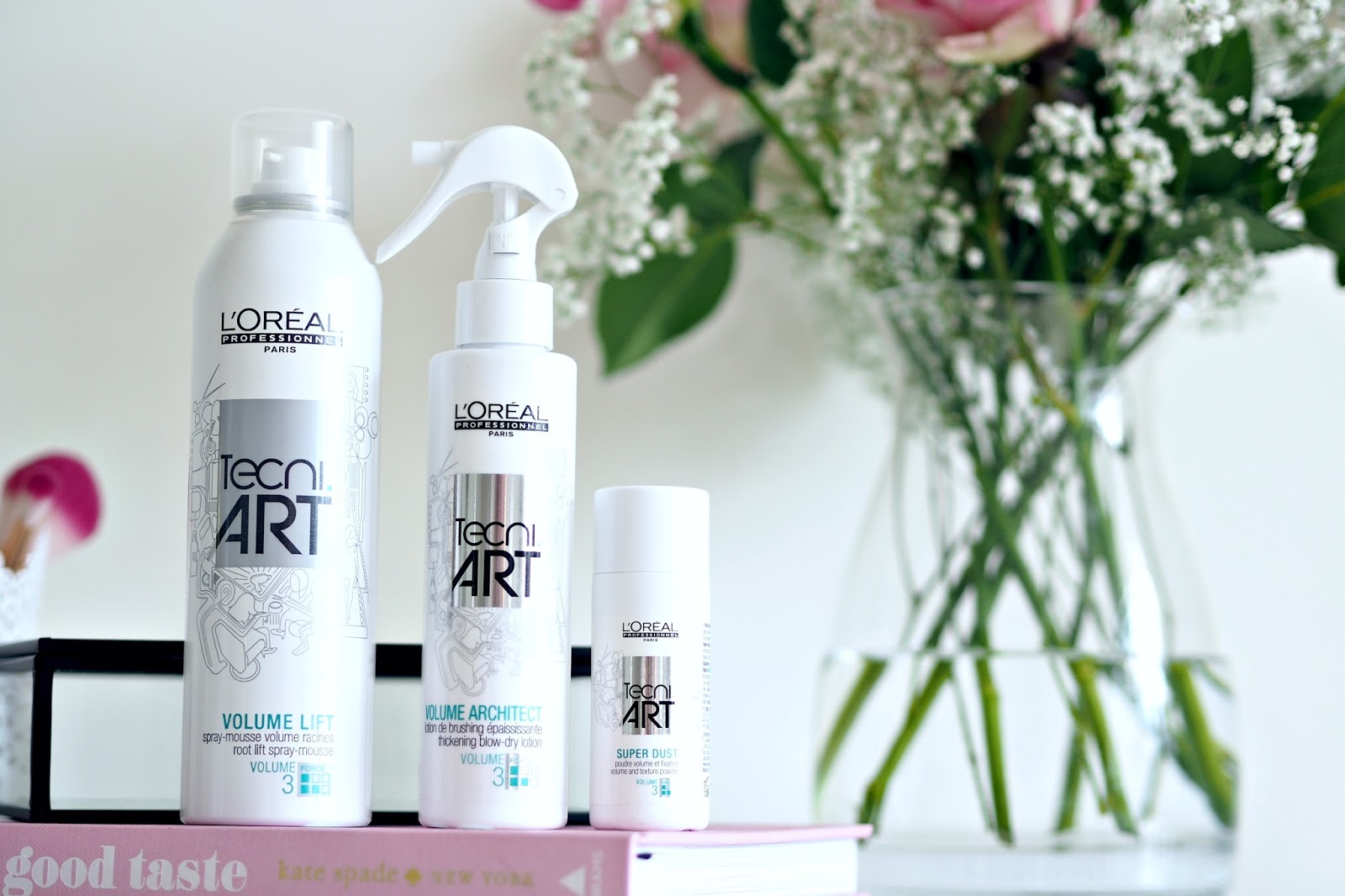 After my colour had been done, Lara dried and styled it into beachy waves using L’Oreal TechiArt Volume Lift, Volume Architect and Super Dust, and then it was back into makeup again. By this point I desperately needed it as my makeup had been on for many hours! Once I fixed it was back into shooting again – videos first and then photos.

It was a long day but totally worth it. I had such a fun time and I’m loving having pink back in my hair again – I actually don’t want it to wash out but they say it should last about 2 – 3 weeks. 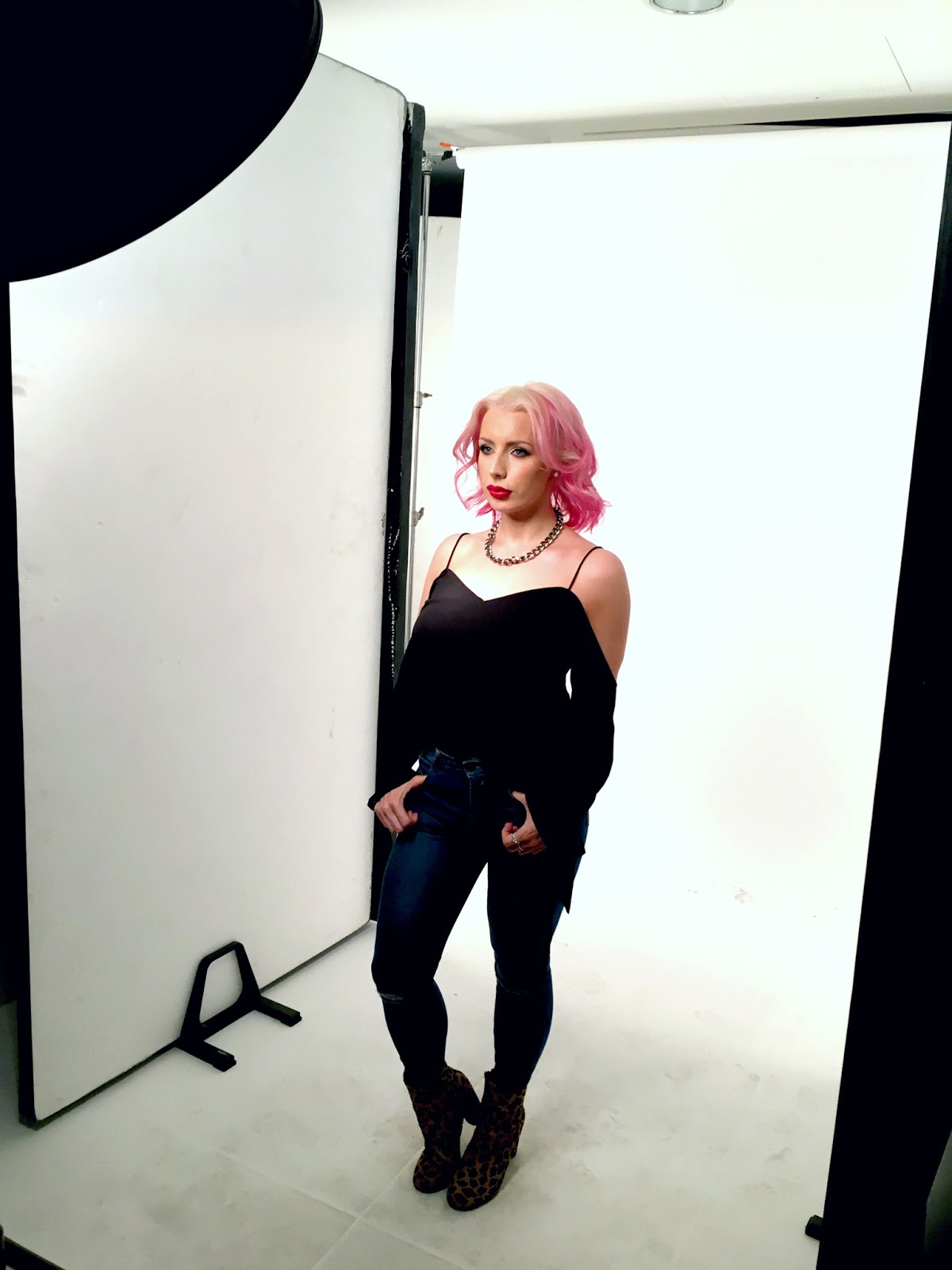 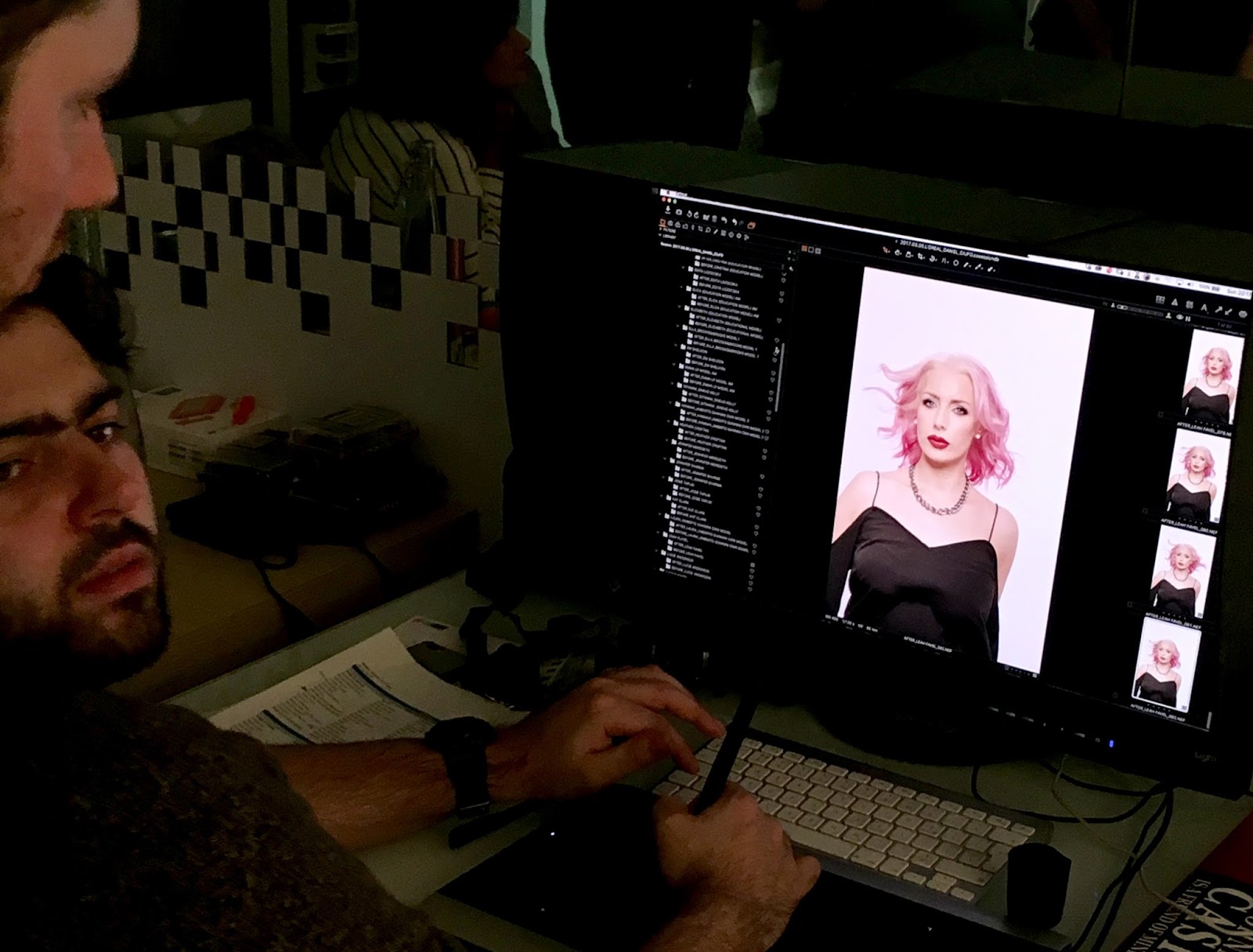 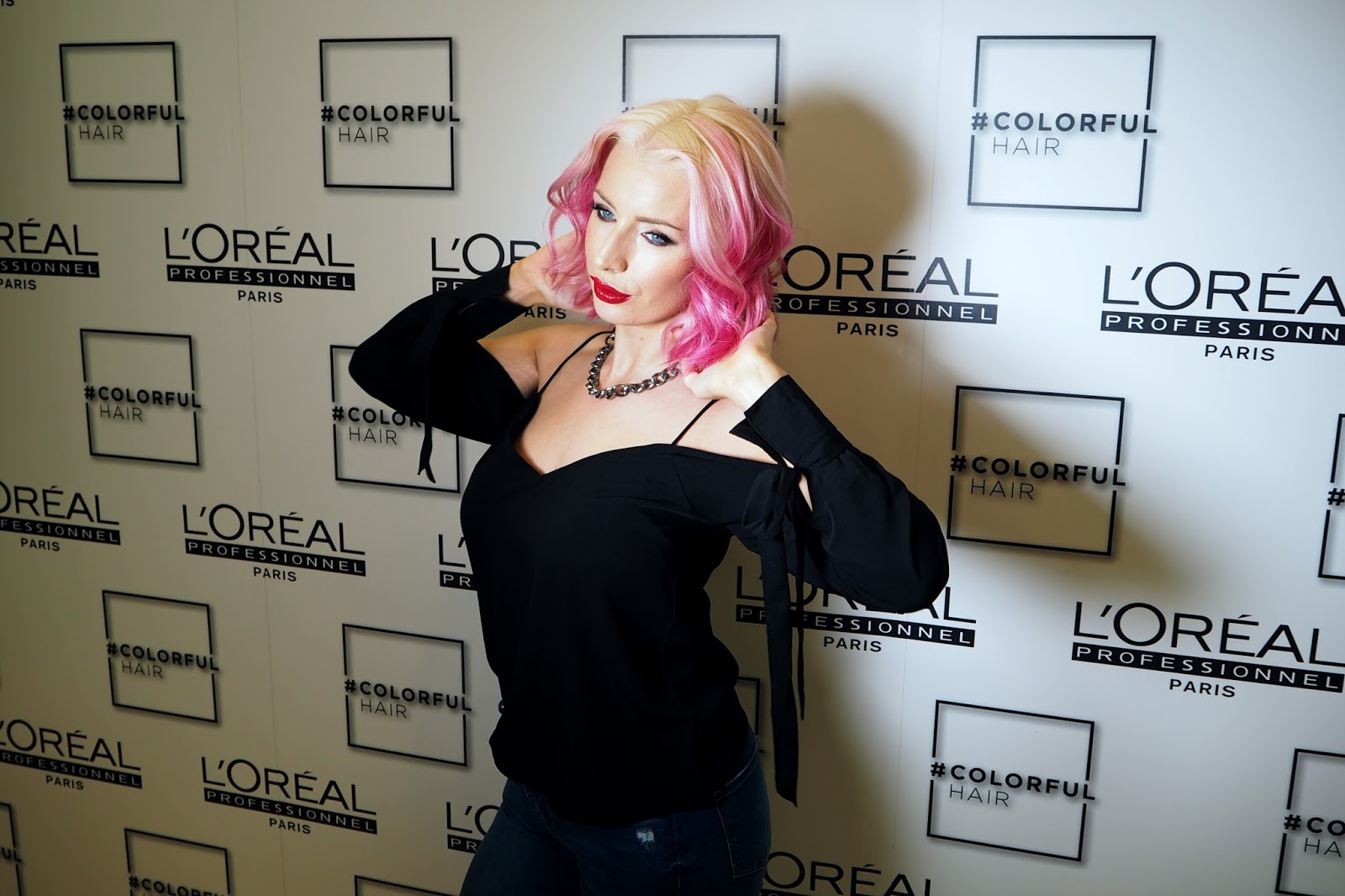 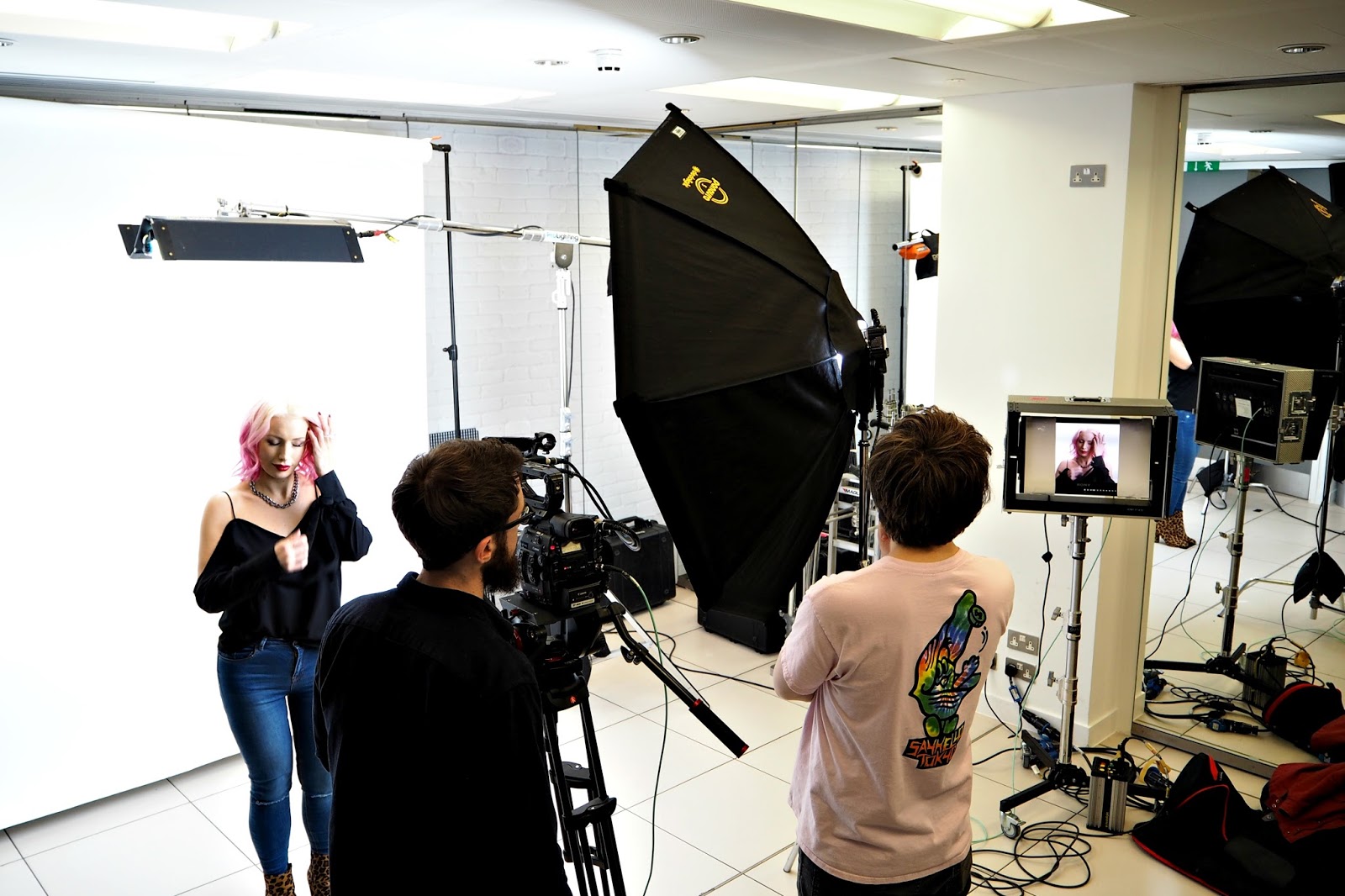 Colourful hair is so on trend right now but I know it can seem daunting, so opting for a temporary colour is the perfect solution before you go for something more permanent –  or great for a holiday or that special occasion.

Keep an eye out for the ads coming out as you’ll see some really funky colours and styles – L’Oreal #Colorful Hair launches in L’Oreal salons nationwide on the 10th April.

What do you think of my pink hair, would you get it done?