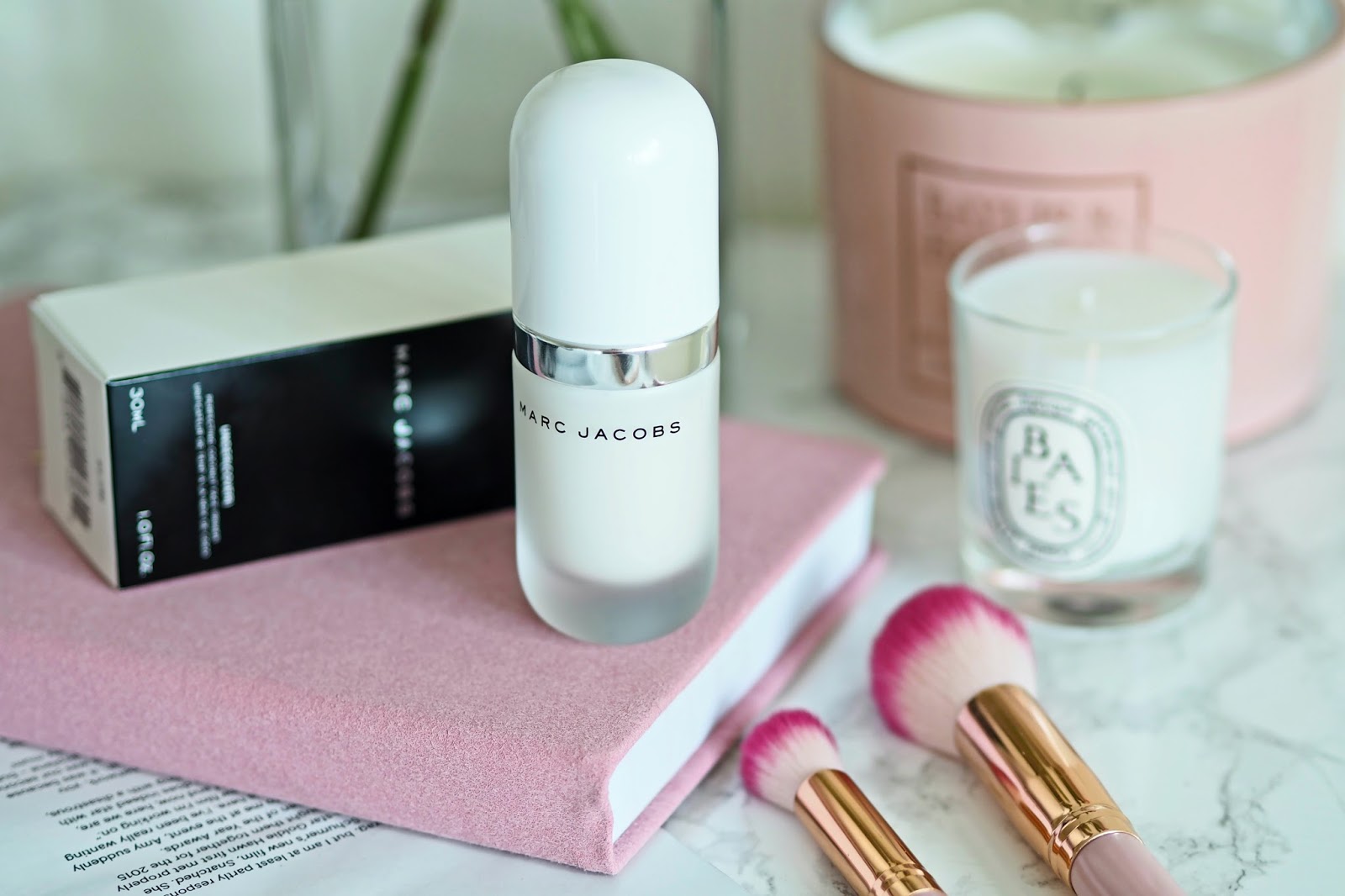 There are two makeup products I’m always on the hunt for. Two products that I feel I haven’t quite found the holy grail for yet. Foundation and primer. Don’t get me wrong I’ve found good ones, and in some cases very good ones but I always feel like there is better out there…. Or this could just be a big personality flaw of mine as I feel like that with a lot of things in life….

Anyway, swiftly moving on from that……

On my quest to find the holy grail of primer I’ve been trying a lot recently and one that has been on my wish list for some time is the Marc Jacobs Under(Cover) Perfecting Coconut Face Primer. I’ve seen a couple of positive reviews about it, but the main reason I was set on buying it was because Stacey had recommended it, and if Stacey recommends anything then I’ll make a bet that’s it’s good!

I had high expectations of this primer. Stacey recommended it. I bought it from Harrods and it cost £32. So I was very excited to try it!

The Marc Jacobs Under(Cover) Perfecting Coconut Face Primer is a thin white fluid that feels dreamy to apply. It’s so light and soft it almost feels like you are rubbing a moisturiser into your skin and absorbs very quickly. Big tick.

As the name would suggest the Under(Cover) Perfecting Coconut Face Primer contains concentrated coconut extracts, and in Marc Jacobs’ words – it’s enriched with 5 forms of coconut including cold-pressed coconut water, juice and pulp. Just so you know.

You only need one, maybe two pumps of this stuff at most, as a little goes a long way – as it should for the price. 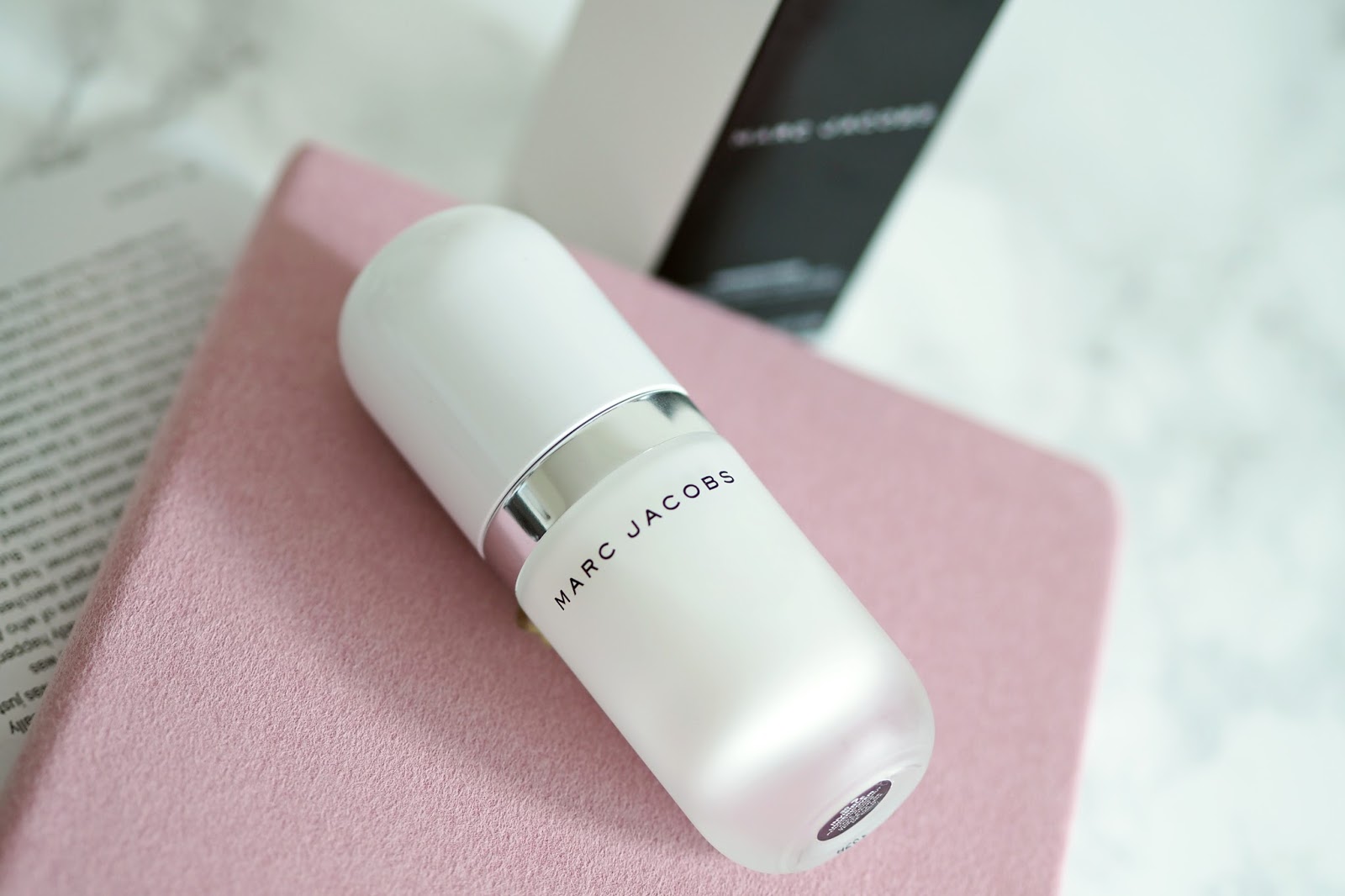 You’ve probably guessed that there is a coconut scent to the product, (which I’m not particularly a fan of) but it wasn’t at all off putting/ overbearing, and didn’t stay around for long. You definitely couldn’t smell it after it had been applied.

The primer hydrated my skin and gave me a good smooth plump base to apply my foundation to. If you have normal to dry skin you will love it. If you have oily skin you may find you need to powder a little more regularly compared to silicon based primers which lock oils away.

I have a difficult skin type as it’s dehydrated and oily at the same time. Great, hey. I find this primer is brilliant for the first half of the day as it does give me a lovely smooth base –  but towards the second half of the day the oil is starts to come through so I’m frantically reapplying the powder to combat the shine. Oily skin gals you’ll get me!

As for staying power I would say it increases wear time of my foundation compared to not wearing any primer, but I wouldn’t say it makes it stay put for any longer than most primers do.

Marc – It’s a good primer (especially for normal to dry skin) but you need to bring the cost down!

Have you tried the Marc Jacobs Primer – what do you think?