Not many people know this, but about 5/6 years ago I had a consultation with a plastic surgeon as I was seriously considering having a nose job. I was never that self conscious of my nose until my brother starting taking me the mick of out of me when I was a teenager and saying it was huge. Brothers – aren’t they lovely, hey! To be fair there are some pretty huge honkers on both sides of my family so I could have been gifted with something a lot worse, but nonetheless its still bothered me for all these years. I really dislike my side profile as I have a bump and it protrudes quite a bit. That’s why you’ll never see photos of me dead side on. On top of that I have a large underbite which gives me a set back bottom jaw and highlights my nose even more. Anyway, going back to the surgery… I’m not sure why, but for whatever reason I didn’t go ahead with the operation. I think surgery on my face just scares me a lot as you can’t do anything about covering it up if it goes wrong, and well, its permanent!

I’ve seen non-surgical rhinoplasty (the proper name for a nose job)  photos all over Instagram the past few years and they have really intrigued me…. Mainly because, somehow by adding filler into the nose, it makes it look smaller! It’s like a magical optical illusion! I was never quite sure I could believe the photos and that they weren’t manipulated in anyway.

Moving on to 2019 and I was contacted by L’Atelier Aesthetics to see if I would be interested in trying out some procedures. Once I did some research and saw how good their reputation was, and that they offered a non- surgical rhinoplasty I jumped at the chance. I could finally see what it would look like to have a straight nose!

Before (left) and after (right) photos after having botox and fillers at L’atelier Aesthetics in Harley Street, London

I was seen by Dr Duncan Brennand (FRCR MBBS BSc Hons) who owns the practice with his wife Emma, based in Harley street, London. After the consultation process I decided to not only go for a non-surgical rhinoplasty, but also botox and to have filler in my chin (to counteract the underbite) and cheeks. I never do things by half do I!?

I’ve just turned 37 years old and I must say, even though I take good care of my skin I’ve really started to notice more lines and wrinkles in the past 2 years than ever before. Now I’m not saying there is anything wrong with lines and wrinkles at all. Getting injectables is a very personal choice and it’s not for everyone, but I decided that I’d like to see what I looked like with a few tweaks. Each to their own and all that. Plus I’d get to get my nose “fixed” without going through all the pain and complications of major surgery and without it being permanent. Just so you know botox only lasts a few months, but the filler (depending on where it is on your face and what is used) should last 12 – 18 months.

As I wanted quite a lot done Dr Brennand decided it would be best to do the work over 2 sessions just to be completely sure there would be no complications. So on the first visit I had Botox done on my forehead and around my eyes and filler put in my chin to slightly length it. Numbing cream was applied to all the areas that would be injected and I’ve got to say that the botox ones didn’t hurt at all, and some I didn’t even feel go in. The chin however, was a different story and it did hurt but only for seconds. Afterwards I had no pain at, all but just some bruising over the next few days. 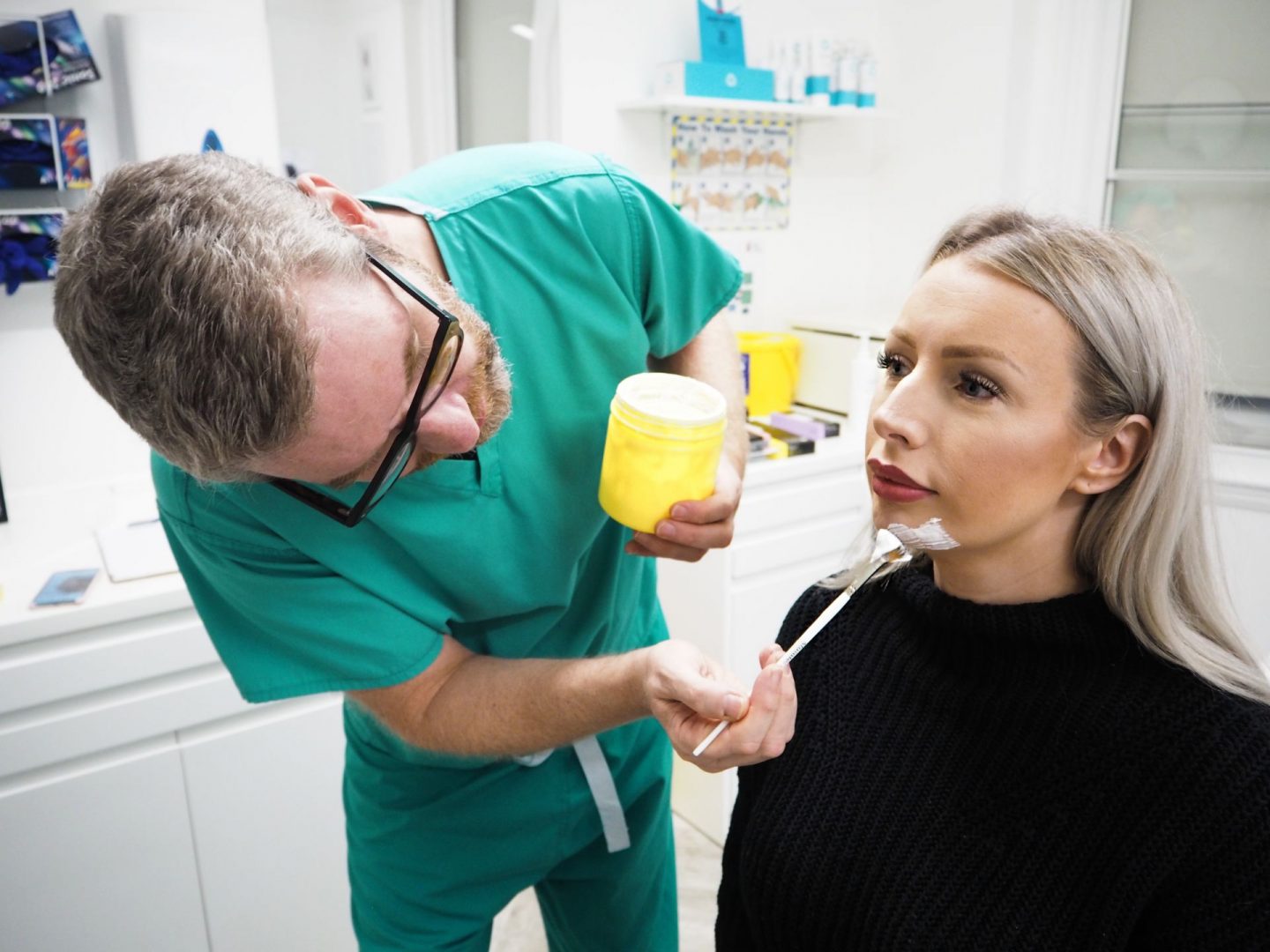 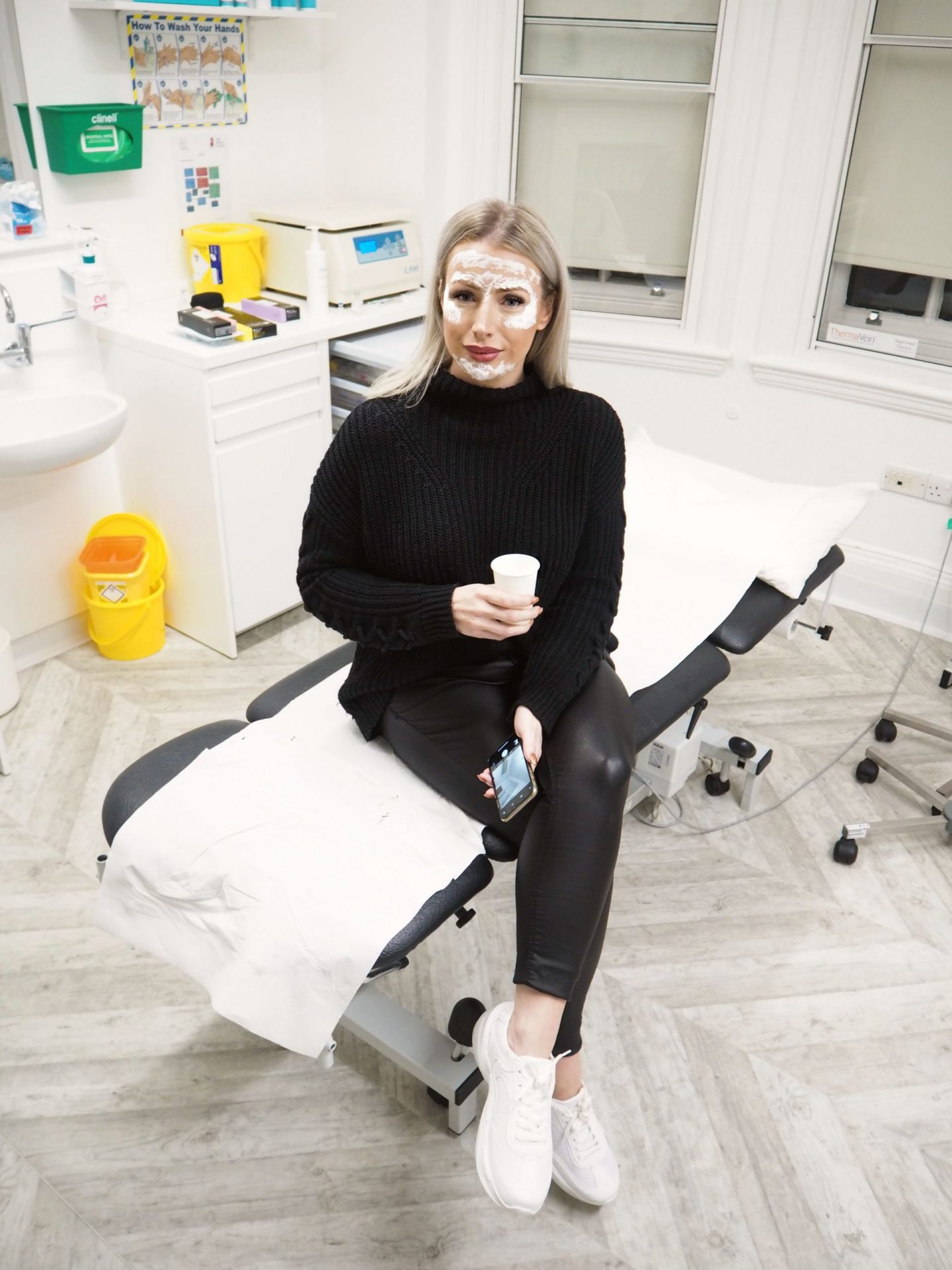 On the second session I had fillers added to my cheeks, nose and a bit more to my chin, plus a touch up on the botox. Again, the botox didn’t hurt at all. The cheeks and nose were painful while the injecting is going on, but by the time I’d left the clinic I was in no pain at all.

The following few days after the treatment my face was sore if touched, so I just had to be careful how I slept and when I cleansed my face. I had some swelling and minimal bruising, which was mainly on my nose. I had my birthday night out a few days after it and I managed to cover up the bruises with makeup no problem.

Despite the pain, I’d do it all over again as I LOVE the results. It’s so natural, yet still makes a huge difference to how I feel about my face. I’ve only had one person ask if I’d “had botox”, but none of my family or friends have noticed. I had to tell them I had something done and then point out what it was. I still don’t think they can see the difference – I don’t think you really do until you see the before and after photos side by side. When you have botox and fillers done you don’t want it to look like you’ve had something done – well I don’t anyway. I wanted it to look natural, and I think Dr Brennand  has achieved exactly that. Due to the botox my skin looks fresher, tighter and my makeup looks better than ever before. I’m so so happy with it.

Did you know that in the UK we do not yet have legislation to prevent non-medical professionals from delivering injectable cosmetic treatments? Anyone like you or I, could go on a 2 day course and get “qualified” to offer injectables, which is why there are so many practices/ beauty salons/ spas around that offer these procedures. Scary right? If fillers are not correctly administered you risk infections, the filler moving away from the intended treatment area, scarring and one of the most dangerous side effects, would be a blood vessel getting blocked with filler which can lead to tissue death and even permanent blindness. This is why it’s imperative that if you are considering botox or fillers that you go a registered Doctor who has met set standards in training and has had a lot of experience with injectables.

I went with a friend on my visits to L’Atelier Aesthetics as a bit of moral support and because I needed some photos taken for this blog post. Upon arrival to L’Atelier Aesthetics I could see the building on the corner of Harley Street, which is famed for having a large amount of specialists in medicine and surgery dating back to 1900’s. Once inside the clinic, the reception area was very welcoming, and I sat and had a lovely chat with Emma Appleby BHSc(MI) before my treatment. As I said earlier, Emma is Dr Brennand’s wife, and also works at L’Atelier Aesthetics offering skin peels, microneedling and medical facials. 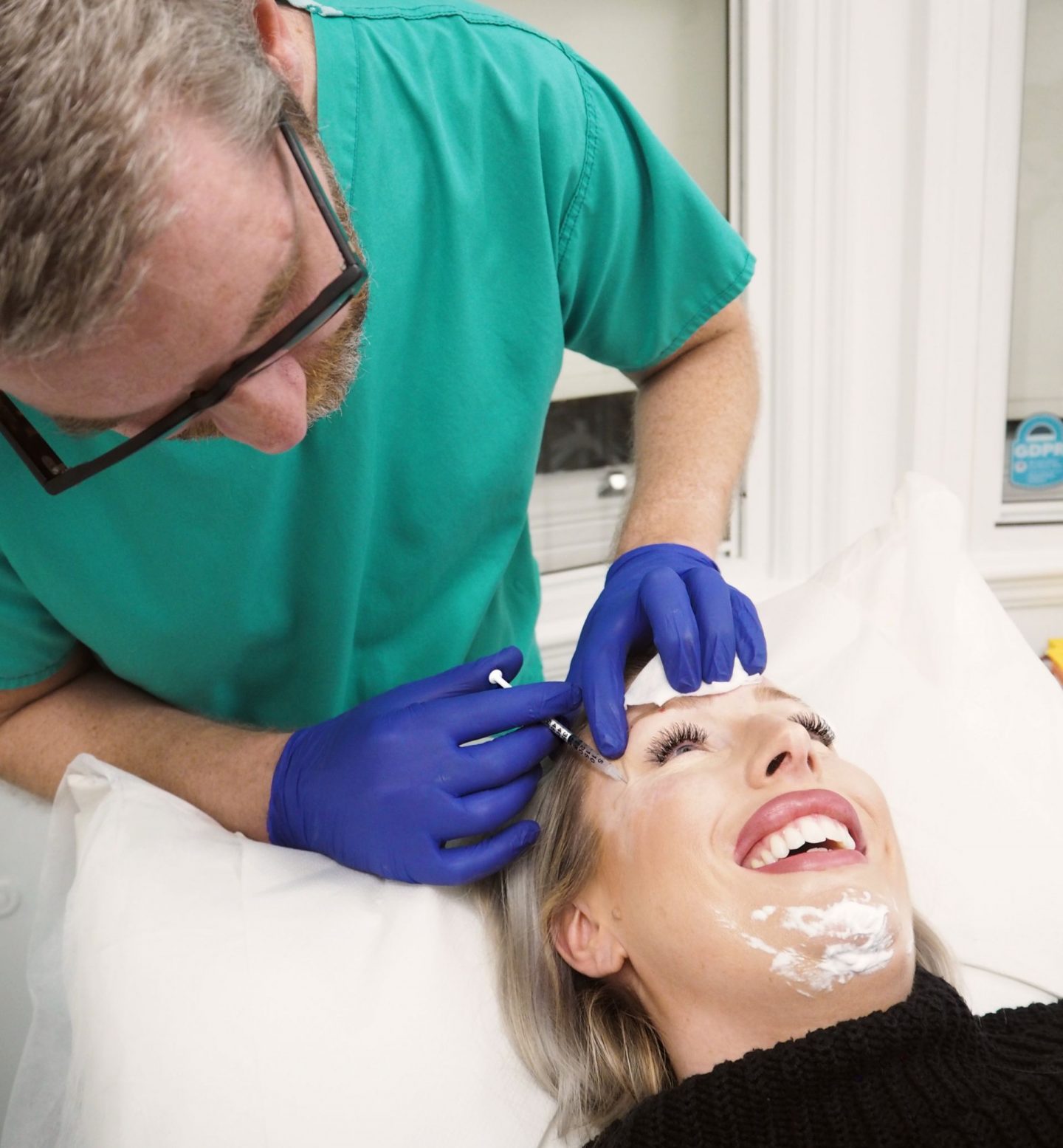 When having anything done which may be nerve racking like this, having the right bedside manner makes all the difference. Dr Brennand was friendly, professional and I warmed to him straight away. He was happy to answer all of my questions, and we even had a laugh along the way. My friend even commented on how lovely he was and how relaxed we both felt around him. Whenever I asked him a question he would always answer in a lot of detail which I liked, and showed how much knowledge he had on the topic. I really can’t recommend him enough. 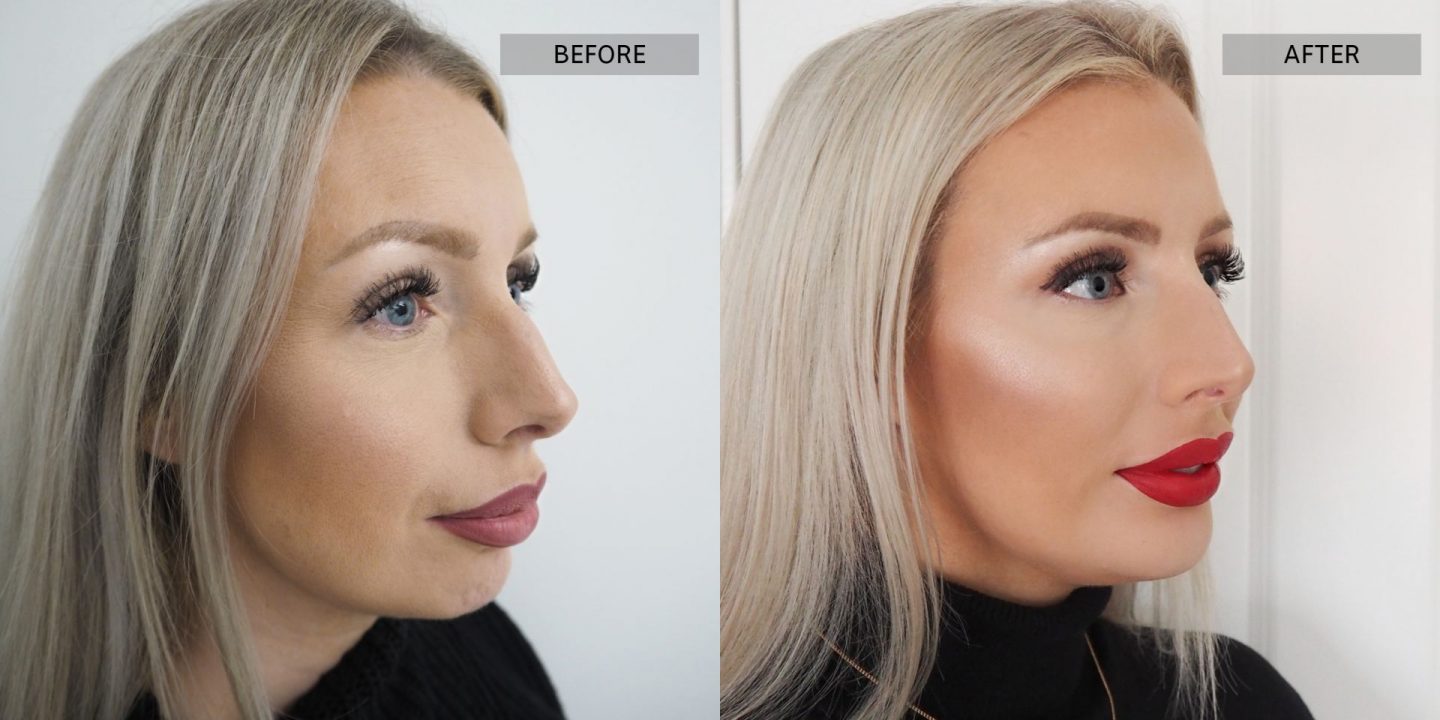 A slightly different angle of the before and after shots

What to check before you have fillers or botox

L’Atelier Aesthetics are based in Harley Street, London – you can find out more about them here.

P.s I must caveat this post that my makeup on my “before” photos had been on all day and these photos were taken in the evening. My makeup had been freshly applied in the “after” photos.

This post contains PR samples/ gifted items but views are 100% my own. Please see my disclaimer here.